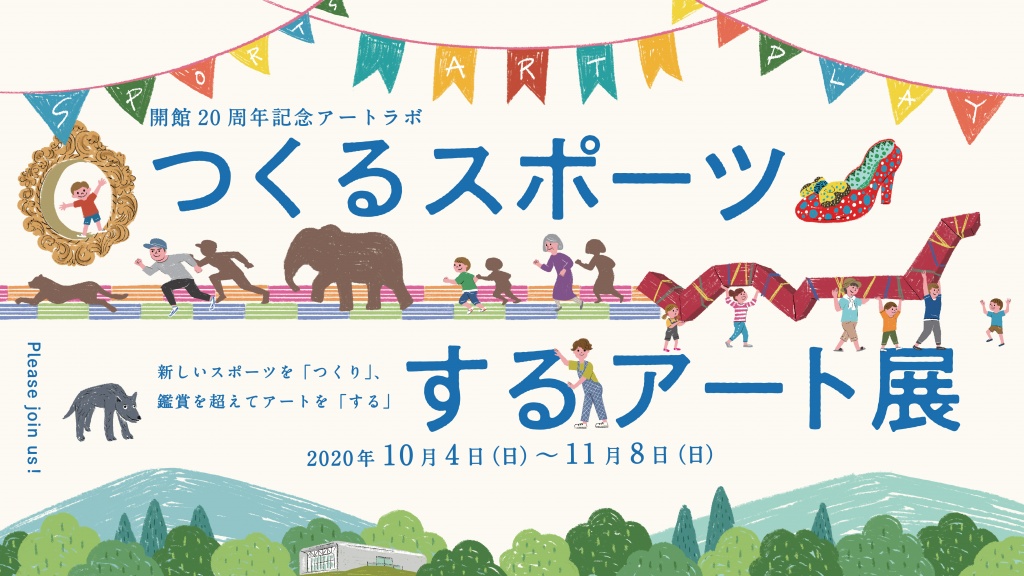 This exhibition, with guest artists Hiroshi Inukai and Ryoko Ando, was initially planned as a space for thinking comprehensively about sports and art. Interest in sports was expected to rise in the autumn of 2020 with major events such as the National Sports Festival Kagoshima (the first National Sports Festival in the prefecture in 48 years) and the annual national para-sports festival. But the outbreak of the COVID-19 in the early spring of 2020 brought about a rapid shift in society, where people had to forge a new way of life. The organizers of the sports festivals were forced to postpone the events and make adjustments to the contents. Given the circumstances, we were also required to make changes to the original plan for the exhibition.

One of the two main artworks in the exhibition is the Sports Time Machine, in which participants run a race against competitors projected on the wall. The virtual opponents can be the recorded images of participants themselves, family members, friends, or even animals. The installation was presented at the Japan Media Arts Festival in Kagoshima in 2015 and attracted many participants throughout its showing. The other is the Carry-in-Project, in which the project team designs and makes an “object that seems impossible to fit but does, just barely,” and then actually brings the object inside a specific space. In addition to these works that were in the original plan, the exhibition presents an opportunity for people to think about co-creation through sports and art amid the changing times, through the perspectives of two artists who work on projects that are about “Creating Sports” and “Playing Arts.”

■Exhibits & Images:
1. Carry-in-Project #24 Kirishima Open Air Museum
The project members design and make an “object that seems impossible to fit but does, just barely,” and proceed to carry the object inside a specific space. The project is a joint effort by the CARRY-IN-PROJECT team from the Department of Architecture and Architectural Engineering, Faculty of Engineering, Kagoshima University, the performance group, AKUMANOSHIRUSHI, and the local community of Yusui Town.
Guest Artists: Takuma Ishikawa/Koki Kanno (AKUMANOSHIRUSHI), Ayami Sasaki (FAIFAI)

2. Festival/Tokyo 20 Pop-up Riso Zine Studio
Pop-up Riso Zine Studio is a printing shop launched at the performing arts festival, Festival/Tokyo 20 (October 16 – November 15). One of its satellite stands is set up in the exhibition space. Visitors can create their own zine – a homemade booklet – and share ideas via the studio’s network of stands distributed across the country.

3. Artist in residence & co-creation project: Space-Time Ground
Artist Hiroshi Inukai awaits visitors at a sports ground where they can collaborate with him to “create/play” a new “sport/art.” They can experiment with various tools and gear and exchange ideas with the artist to develop and play an original sport/art.

4. Future UNDOKAI Project and Sports Co-creation
Future UNDOKAI Project invites participants to reinvent the undokai (meaning, “sports festival,” an annual event in Japanese schools) by interpreting it as a medium or an artform. Instead of engaging in competitions made by someone else in the past, participants create their own games and organize their original undokai. Videos and photographs of the Sports Co-Creation project are presented as well. More than fifteen events have been organized by people all over Japan since 2014.

6. Closing remarks
Since the global outbreak of the COVID-19, we have all witnessed first-hand the transformation of society. What remains unchanged in terms of creating and playing in these shifting times? We hope to think about this together with visitors at this exhibition. 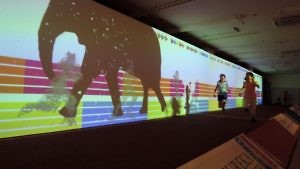 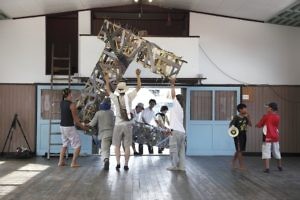 Hiroshi Inukai / Ryoko Ando
Hiroshi Inukai
Born in Aichi Prefecture in 1970.
Inukai studied under film director Masashi Yamamoto and later became a game director. Devoted to the idea that video games are communication tools that connect people, he worked exclusively on producing PvP (player vs. player) games. In 2002, he started branching into eSports, a genre combining sports and games. He organized the preliminaries in Japan for international competitions such as WCG and CPL and participated in the main rounds. He won awards at the Japan Media Arts Festival with eSports Ground and Song of ANAGURA-Missing Researchers & their remaining Devices, both physical works that are not confined within the small video screen. His recent efforts include the Future UNDOKAI Project, which facilitates the collaborative creation of sports and Sports Co-Creation.

Ryoko Ando
Born in 1976.
Ando graduated from Tama Art University, Faculty of Fine Arts, Department of Architecture. She founded the space design studio design musica in 2009 and has been running the lithographic printing and D.I.Y. studio Hand Saw Press since 2018. She is a part-time lecturer at Tama Art University, Department of Information Design. Her major works include Sports Time Machine (Excellence Award, Entertainment Division of 17th Japan Media Arts Festival; Honorary Mention, Interactive Art category of Prix Ars Electronica 2014), and Backward from the Future (space design and art direction), which is part of the permanent exhibition at Miraikan (The National Museum of Emerging Science and Innovation). She is the co-author of TOKYO Interior Tour, published by LIXIL Publishing. Ando crosses the border of art and design and creates with collaborators in spaces that are open to everyone.