Familiar with wood carving since early childhood, the self-taught artist Kurowarabi So developed his unique style as he continued to sculpt even while working as a computer engineer. Making a name for himself as a prize-winning artist at a number of public-invitation exhibitions throughout Japan from the 1980s, in 2015 he received the Hirakushi Denchū Award for notable Japanese wood sculptors.

Kurowarabi pays great attention to detail, closely mimicking the textures of  what he sculpts — whether cloth, shoes, or insects — while addressing relevant social issues and making statements about the human heart. Viewers find themselves drawn into the world of his subjects — seeing themselves or others as silhouettes overlapping everyday objects or parts of the body, as reflected in the mind of the artist.

This exhibition shows both early works and newer ones, including “Chotto kyūkei (Have a break)” (1985), a highly acclaimed piece now in the museum’s private collection. We trust that visitors will capture glimpses of the recurring themes in Kurowarabi’s artistic endeavors and see how his forms of expression relate to one another. 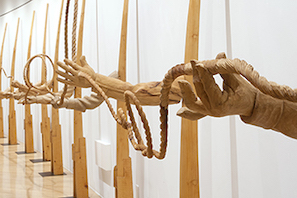 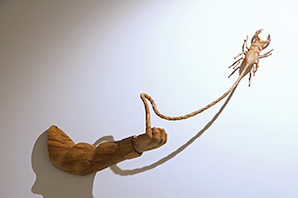 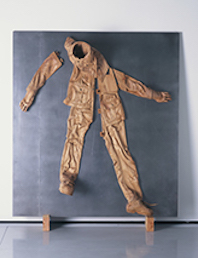 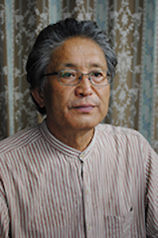 Kurowarabi So
Born in Akune City, Kagoshima Prefecture in 1951, wood sculptor Kurowarabi So presently lives in Aichi Prefecture.
He studied under sculptor Horiuchi Masakazu (1911-2001) starting in 1984, winning grand prizes at both the 1st Contemporary Japanese Woodcarving Festival (1988) and the Asahikawa Award for Contemporary Wood Art (1996).
In 2015 he received the Hirakushi Denchū Award, one of Japan's top awards in sculpture. He has also held numerous solo and group exhibits.
Kurowarabi participated in the artist-in-residence project in the event of the first anniversary of the opening of the museum’s main building in 2001.