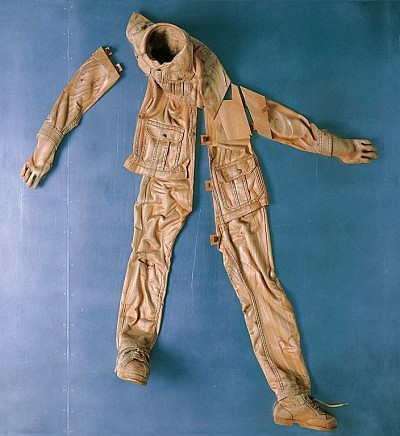 Title
Have a Break

In this piece, a fatigue jacket cast off inscribed on the camphorwood thrown together speaks of the reality of its invisible owner and evokes the viewer of a humorous imagination.

The theme that carried through many of his early works was the life of workers with old, worn-out gloves and jeans in motif which he used since the 1970s. He does not directly evoke the human being as such, but makes the presence and vitality felt of something in absentia.The artist since childhood has been consistently making wood-carving. He is said to have been influenced greatly also by the carving technique of Japan's modern sculpture. He does not use abrasive paper and finishes his works with hand chisels and planers only. His skill that freely manages the wood is highly appreciated.