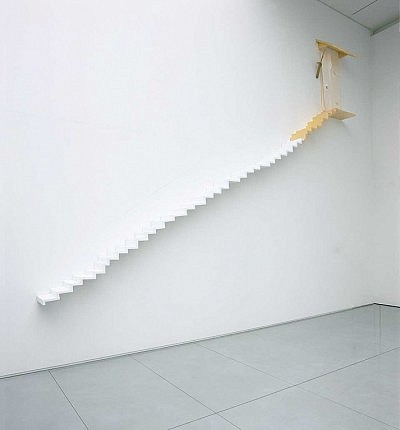 The composition of the worn out stone steps and the entrance to the living quarters of "Casa di Li-Pai" successfully produces the effective which reminds one of Li-Pai's poems (that the artist has been very much fond of since childhood) and the personality of the absent dweller of the house.

After having majored in interior design at Tama Art college, he went to Milan. Since then, he has been actively engaged in creative activities, mainly in Europe, and has become an interna tionally acclaimed artist today. In 1993, he held the first exhibition in Japan of his outstanding works, which introduced the tracks of his life as an artist. He has been known since the early days of his artistic life for his cynosural works distinctively featured by his philosophical thinking. But in the 1980s, he began using freely diversified materials such as marble columns, metal, wood, paper, etc. and demonstrated relations between things and the diversiform deployment of space.