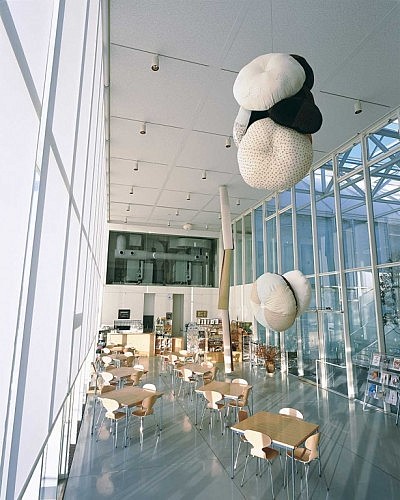 Title
This Intimacy You Know

The cylinder-shaped body that reaches from the floor to the ceiling in the cafeteria space is nothing more than a carpet, mundane material that everybody is familiar with. The material recollected with the memory of its soft touch under the bottom of our feet that is, in the nature of things, laid down on the floor is now forming a straight cylindrical shape like a slender structure. The round downy thing hung down from the ceiling looks like a cushion itself in shape and material and nothing else. But it is none-the-less an art object that the artist has created in a casual manner from commonplace objects by retouching their usual size and position.

Her works have attracted public attention for their forms asking about the meaning of structure and surfaces. She has been using, since the 1980s, such materials as fake fur, leather, rubber, artificial turf and the like rather than traditional art materials. There has always been a declination concealed in her works.