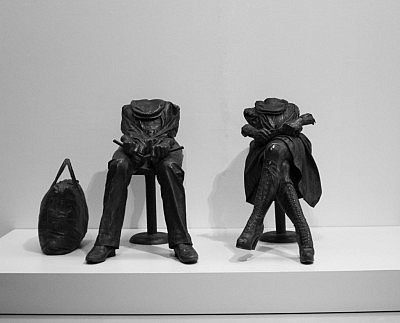 Resin used to shape the human figures. Though they lack their upper parts, the work on the torso portion is all the more reminiscent of human beings and our lifestyles. For what common reason were two strangers present together? We cannot help but imagine a sort of drama into which we are given a glimpse.

He was from Wadomari town in Okinoerabu Island and he produced works at Saitama Prefecture from adolescence to last years. Since 1960’ s , he was been the top-liner in Japan of a technique that could cast a human figure exactly as it was by using polyester. It is characteristic of his work to pursue realism and humor and to express the stopping moment.