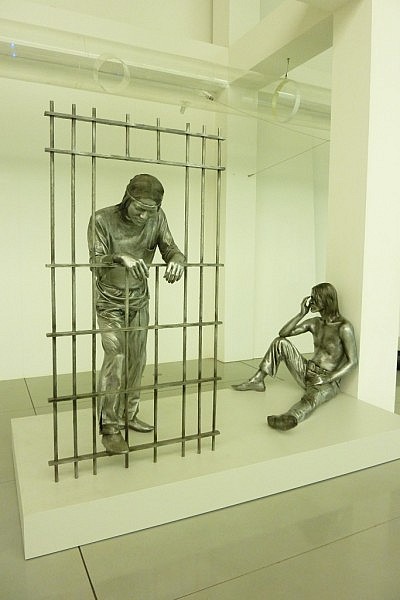 Title
Outside of Freedom

Human figures shaped with resin is typical of Shigemura's style. These figures and iron bars are used to great effect to express the agony against freedom everyone experiences during their adolescences. This piece is composed of two elements : the standing figure expresses a man's expectations of the fragile hope he holds towards the various events he faces daily, while the sitting figure represents the disappointment of a man in the depths of despair.

He was from Wadomari town in Okinoerabu Island and he produced works at Saitama Prefecture from adolescence to last years. Since 1960’ s , he was been the top-liner in Japan of a technique that could cast a human figure exactly as it was by using polyester. It is characteristic of his work to pursue realism and humor and to express the stopping moment.