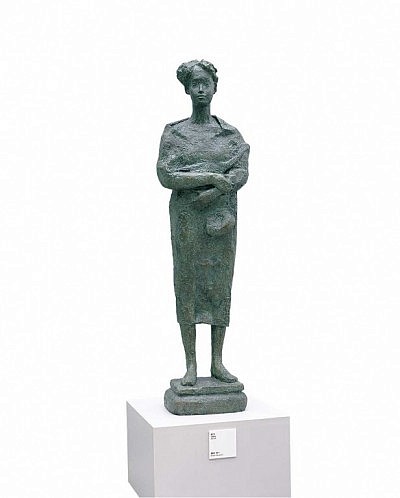 A strong influence of Etrurian art became prominent especially in his works in the latter half of the 1980's. This piece was exhibited at the 64th Hakujitsu Exhibition in 1988, soon after he had returned to Japan from his studies overseas. The simple and light-hearted treatment of the mass and volume with gentle lines creates a beautiful form and a sense of liveliness, a clear indication of his admiration for the Etrurian sculpture.

In 1983 Mizoguchi went to Italy to study Etrurian sculpture as a foreign researcher representing the Foundation for the Development of Japanese Private Schools. Though he began his artistic journey in the tradition of realism, he fell in love with the unique civilization of the Mediterranean left by the Etrurian people.